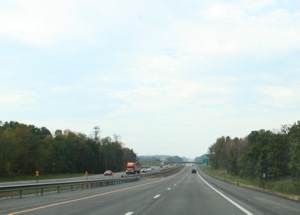 This was a tough one to watch. The defense played it’s best game of the season by far. This is the second week in a row that the they have held a opponent under a 100 yards rushing. However, just like the season opener this one ended in disappointment with a field goal in the final seconds. As I had mentioned last week, I was just able to reach the outskirts of the Rochester area, so I am almost way. This coming week is the Bills bye week, and I don’t think it could have come at a better time. It looks like they will be getting a lot of players back for the Baltimore game, and the second half of the schedule is looking a lot more promising than the first five weeks. Hopefully we will be able to turn this thing around.
Posted by Matthew Keeney at 8:51 AM

As a life long Bills fan, I feel it is my obligation to attend a home game whenever possible. For every first down gained by the Buffalo Bills offense during the 2007 season, I will drive one mile towards Ralph Wilson Stadium from my home in Syracuse, NY. My goal is to cover the 157 miles necessary in order to be in Buffalo to attend the week 14 game versus the Miami Dolphins.